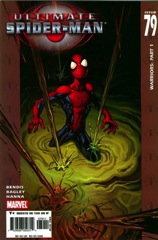 Everything goes fine in this issue until the end reveal. Ultimate Moon Knight has just about the worst costume design ever and it’s hard to make it through his one page without giggling. He looks like Marvin the Martian.

Otherwise, Bendis skips back to the beginning of his previous Mary Jane issue and follows Peter instead. It’s a nice little move, though he doesn’t announce it, which seems like déjà vu.

It’s also a Kingpin and crime story, not a Peter Parker story (not yet anyway). There’s a lot with Ultimate Kingpin being in trouble and the guys out to usurp him. Bendis handles those parts really well.

He also writes some intense stream of consciousness stuff for Peter–it’s practically a jumping on point there’s so much exposition in it–but it works. It reestablishes Peter as the comic’s lead, something Bendis has ignored lately.