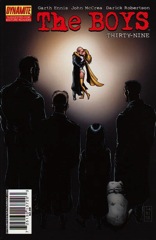 Ennis is tying some stuff up–or at least buying the laces–with McCrea and Burns on the art. It’s not the right issue for them, it’s all way too mundane.

Butcher finally finds out about Annie, Frenchie tries to get the Female hooked on 2000 AD, we find out Mother’s Milk has some issues from his childhood. I think that list about covers it.

The best writing Ennis does in the comic is for Annie though. Hughie’s got bad dreams, but it doesn’t amount to much. Ennis saves all the good lines for Annie–and a couple for Butcher, obviously–and one has to feel bad she’s not a more central character.

I mean, he writes her not just the best arc for the issue, but the comic lines are just amazing. Hughie doesn’t deserve her. Ennis has done amazing things with her character.