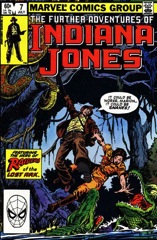 Michelinie definitely seems to have a formula–apparently based on Raiders–Indy starts the issue on one artifact hunt, it leads to a second hunt, which somehow has Nazis involved. It’s only the seventh issue of Further Adventures and it feels like there’s not going to be much interesting outside the little character moments.

The little character moments are because Michelinie has recast Marion as a reporter who follows Indy around the globe (at least this issue). It gives him a brassy damsel in distress to occasionally rescue and someone to ask questions to make the exposition seem more natural. It’s not a bad move, it just seems weird. As Michelinie writes her, Marion is reckless and loves to drink; she’s not the standard romantic interest.

Kerry Gammill and Sam de la Rosa take over on art, hopefully to stay. They handle the period and action well.