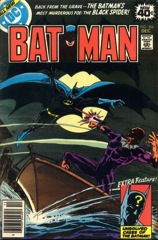 Conway does a riff on High Noon with Batman protecting a drug dealer from the vigilante, the Black Spider. Because Conway keeps all Batman’s plans from the reader, it does have some successful plot twists.

Except maybe when Batman falls down the entire Wayne Foundation tree and lives. The only real damage is to his costume–the cowl and pants survive, but it’s shirtless Batman for the final showdown. Very, very odd.

Calnan continues to be ambitious, particularly during action scenes and they still don’t come off. But it’s not a bad feature.

Rozakis’s backup, with Batman trying to discover the identity of his master blackmailer, is pretty good. It ends unsatisfactorily for Batman, which one has to assume would happen a lot. There are some great summary panels from Newton too.

I think the backup might have more subplots than the feature… Conway’s story is professional, Rozakis’s is passionate.