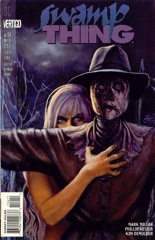 There’s a cute little reference to Ultraman and Owlman on the news at the beginning of the issue. Alec’s travels bring him to Earth-Three (or something like it) but he doesn’t run afoul of the supervillains. Instead, he finds himself with the Arcanes.

Only, Anton’s the good one and Abby’s the bad one.

There’s a lot of awful stuff this issue. Millar never gets too graphic, keeping it at the “just enough” level but he makes up for the lack of visuals in disturbing intimations. As a Swamp Thing comic it’s interesting because it’s the first time Millar’s written Abby solo, but it’s more interesting as a DC comic.

The implications of Earth-Three never really come through like they do here.

Lots of great art from Hester and DeMulder. All of it’s disturbing… it’s still great.

Millar’s just wasting time though. Alec isn’t learning anything from his trip.