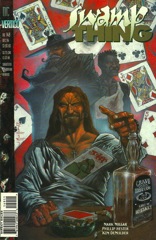 Did Sargon die in a Swamp Thing issue? I can’t remember. I think maybe he did. If so, Millar’s reaching way back to bring forward new plot elements–though it’s not essential for Sargon’s character to be Sargon, it just needed to be a magician with a niece.

Speaking of the niece, Millar spends about half the issue with her. She’s the reader’s gateway; Alec walks around without doing much and the mystics all sit around and talk to each other.

Millar goes for the very disturbing at end–no surprise–and it builds up a lot of expectation. Unbelievable horrors would be okay just so long as the good guy wins, right?

Except Millar hasn’t really given Alec much power back. He’s also rash and slow. Millar shows Alec’s big move from the niece’s perspective, which makes him seem even more passive.

The series is nearly back on course.