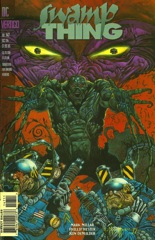 Millar doesn’t keep up with the unpleasantness. This issue is far less intense than the previous, even though Alec’s on the run in Amsterdam with Nelson (the big game hunter) after him.

It’s an action issue, with interludes to the mystical stuff and a downright disturbing cameo from the Spectre at the beginning–fairly sure Millar further breaks the series continuity with that cameo too but whatever. Hester and DeMulder doing an action issue is a cool thing to see; the bad guys are shooting at Alec–who’s back to green form–or burning him or freezing him or whatever.

The big finale to the action scene is the first time Alec’s narration returns. Millar does an excellent job with that narration this issue; matter of fact, but still reaching for something more.

The comic’s mildly confusing because of the structure and cast. Millar makes Alec’s spotlight moments count though.