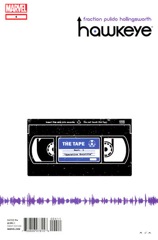 I love the way Javier Pulido does superheroes. The issue’s mostly supervillains and not many costumes for them (except Madame Masque); Captain America does show up for a bit. Pulido somehow retains his style, which isn’t particularly realistic (at all), but makes the superheroes seem to be realistically visualized.

The issue’s great, though Fraction assumes the reader is a lot more familiar with Hawkeye history than I am. Apparently he assassinated someone for SHIELD and there’s a tape of it. Pretty sure modern Marvel continuity starts after the death of VHS–especially for camcorders–but whatever. Fraction’s doing it retro. It’s a fine touch.

Clint keeps getting himself in trouble. Fraction delights at having a not too smart protagonist too. It’s not masochistic because Pulido’s art isn’t grim enough… but it’s close.

The soft cliffhanger is wonderful too. Fraction’s doing great work on this one.