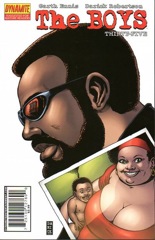 Ennis gets to Mother’s Milk’s story–and hints at something to do with the Female’s. M.M.’s story is a doozy. Ennis takes a somewhat traditional story–the giant corporation knowingly poisoning people with toxic waste–and adds the superhuman element.

It’s devastating at times, even with some of the more amusing visuals. It’s like Ennis and Robertson are setting up jokes, then knocking the reader for being shallow enough to prepare for them.

The only real problem is how Mother’s Milk tells the story. He just tells Hughie. It’s not just without prompting, Hughie’s busy asking about other things. M.M. just ignores those questions. The lack of a good delivery system is what hurts the story–especially since there’s no resolution to the big question the story raises.