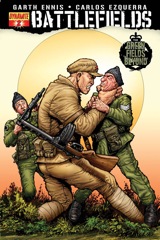 Stiles and his sidekick spend the issue away from the rest of the crew, observing a famous historical battle. They participate, but Ennis mostly just uses Stiles to explain what’s going on. He does it in such a way, of course, it never feels like exposition.

It should though–I mean, Stiles’s sidekick is a generic new recruit, the perfect person to be getting the exposition. Maybe the horrific conditions makes it seem less obvious, but it really didn’t occur to me how obvious it could have been until after finishing the issue. During, one can’t concentrate on anything but what he or she is reading.

The art is still loose, but there are some amazing panels in here. Particularly the phosphorous sequence.

Ennis outdoes himself. Battlefields becomes an educational docudrama and Ennis never draws attention to that value of it. He maintains the dramatic tension throughout, especially the finish.