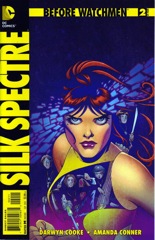 Cooke and Conner set up Laurie as a hippie superhero; it’s kind of cool and definitely a decent look at sixties San Francisco. What’s interesting–and something I don’t think the original series ever established–is Laurie goes the “with great power” route. She turns into Silk Spectre because she can help people if she does. It deepens the character quite a bit.

And she needs it, because Cooke and Conner spend almost half the issue on the supervillains plotting to get kids tripping and consuming. It’s an incredibly boring scene and it goes on forever and ever.

Her boyfriend’s not much of a character either. I haven’t determined if they’re supposed to be teen runaways, but one would think his parents might be concerned.

The ending cliffhanger’s either going to be awesome or some terrible way to be grim and gritty.