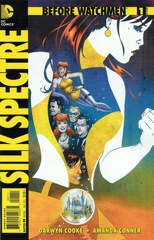 For Silk Spectre, Darwyn Cooke and Amanda Conner go the romance comic route. Or at least closer to it than I was expecting, but it makes sense given Laurie’s age during the high adventuring days of Watchmen.

She’s got her teen story going while Sally deals with aging and raising a kid to be a costumed adventurer. Cooke and Conner make both women utterly sympathetic, but it only works on Sally’s side because the reader knows her story.

Without it, she’d come across as a tiger mom. Except maybe the phone call to Hollis, which is as close as the comic gets to self-indulgence. It needs a little more, but it’s quite good as is.

Conner’s art never gets too cute, but always maintains the romance comic tone. It’s rather good and hard to imagine Spectre without it.