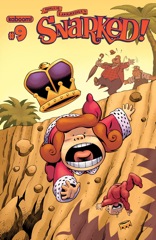 This issue is gloriously full. The cast arrives on Snark Island and Langridge sets them out exploring. But the captain has been to the island before, which leads to him remembering geographic features. Then there are the bickering lion and unicorn guards, then there’s the missing king….

It goes on and on, so much so the cliffhanger comes as a surprise. Langridge has already put his characters through two major challenges; one would expect him to let up a little.

There’s a lot of great character work in the issue too. McDunk magically becomes smart on the island, leading to some good dialogue exchanges, while the Walrus reveals more of his tenderness. And Scarlett has a big scene too.

Technically speaking, this issue is Langridge at his best. His storytelling skills–the way he paces the story, how he layers in the subtleties–are amazing. Snarked is a great comic.