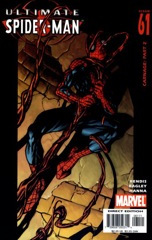 The best part of this issue has to be how little time Bendis gives Ultimate Punisher. There’s a fight scene–not a particularly good one, Bagley loses track of the criminal the Punisher is after–but there’s no personality to Ultimate Frank.

It’s all from Peter’s perspective, even though Bendis could have gotten away with a little Frank. Even though Ultimate Spider-Man is a fast read and is the comic book equivalent of tasty junk food with a good aftertaste… Bendis is serious about it being Peter’s book.

There’s also a neat little bit with Curt Conners being Peter’s emergency doctor. The two play well off each other; Bendis makes Ultimate Dr. Conners enough of his own character to be unexpected in conversation (even when he’s predictable in his actions).