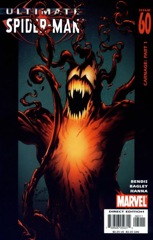 Bendis doesn’t have anything this issue. Well, he doesn’t have much. He introduces Ultimate Jeanne De Wolf, but otherwise… nothing.

There’s a dream fight between Spider-Man and the Lizard, there’s a way too long fight–with Bagley wasting space on double page spreads–with some villain Bendis doesn’t even bother to give a name and then there’s Peter and Curt Conners hanging out for a bit.

Two things stand out. First, during the big fight scene, Peter and the dumb villain are breaking precious museum items. After the fight, all the hostages of the big dumb villain forget about the artifacts–and how they weren’t exactly in immediate danger. The big dumb villain wasn’t about to shoot one, for example.

Bendis doesn’t even try for logic.

The second standout is the scene between Peter and Conners. While it’s not enough payoff for the rest of the issue, it’s good.