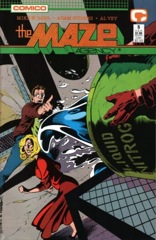 Barr establishes a bad first here–he has his leads accuse an off-panel suspect. The reader finds out the suspect’s identity at the confession.

Overall, it’s a troubled issue. The format keeps it going, but there are art problems (Al Vey isn’t the best inker for Hughes) and lots of story ones. The art ones aren’t too bad–Vey just doesn’t suit Hughes, the art isn’t bad. But Barr’s story? It’s weak.

First, the romance subplot between leads Gabe and Jennifer. They’re dating other people but making out once an issue. When Gabe dates someone else, Jennifer gets upset. Barr’s solution to their tiff is to have Gabe be cruel to his date. It makes both leads unsympathetic.

Then the little things. A cryogenics firm owner’s name is Lazare (as in Lazurus). It’s like Jim Shooter’s writing the comic.

I’m glad it’s the fifth issue and not the first.