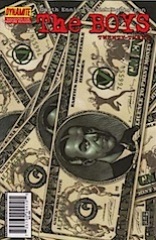 Well, Ennis gets to ripping on Marvel and, wow, does it ever go well for him. He goes for the X-Men, which I didn’t expect. There’s a lot about their popularity and the number of teams and so on. It’s all quite well-done.

There’s a definite change in tone (from DC to Marvel)–the Boys have a different kind of target. It’s nice Ennis is able to toggle between the two companies. I hadn’t expected him to cover the X-Men at all, much less so deftly.

There are a couple good subplot starts–these scenes are the issue’s more seriously–but the last page is simply amazing and makes one forget about everything else. Ennis goes for a big laugh and gets it; the rest of the issue just has smiles. Maybe he was building up.

Robertson’s art’s good. He gets to do both funny and gross.