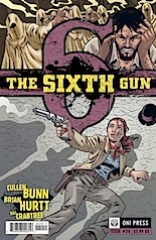 Brian Hurtt has a very pleasant style to his artwork. It’s often warm, regardless of content. This issue, however, featuring Drake tortured, it’s not so pleasant. The aged doctor doing the torturing is almost cute in an eccentric mad scientist way, but he’s doing such terrible things. Hurtt’s art style leads to The Sixth Gun being a constant surprise.

Also a constant surprise is how low Bunn is willing to take Drake and still keep him a sympathetic character. Even when he’s being tortured, Bunn manages to reveal something else unpleasant about the character.

Meanwhile, Becky is in the middle of a shootout–which has a couple surprises–and it becomes clear Bunn’s keeping the arc’s supporting cast distant for a reason. While Drake’s scenes are interesting because it’s a lot of information about the backstory, Becky’s half of the issue is pure Western shootout excitement.