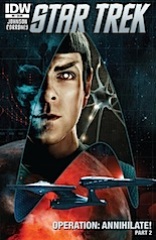 While this issue is undeniably better than the last one, Corroney’s bad art is still a problem and Johnson exhibits a different writing problem. The issue’s better because more of it is dialogue. Spock and McCoy try to figure out what’s going on. It’s probably lifted from the original episode, but it definitely works. There’s tension, there’s drama. Johnson can handle it.

But he can’t handle the scenes between Kirk and his brother. Johnson’s unable to write Kirk as a person. He’s a wooden stand-in, as emotionless as Corroney’s photo referenced visualization of him. It’s Star Trek’s salient problem. It can’t sustain itself without a compelling protagonist–all it’s got going for it is a gimmick and a gimmick isn’t enough.

Johnson relies too much on text too. It’s a comic book, it’s supposed to be visual. It might be an editorial decision; if so, it’s a bad one.