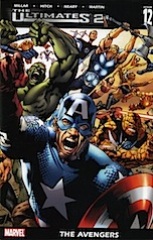 When Hitch’s art suffers this issue, I suppose it’s more understandable. He’s drawing every established Ultimate character and probably some other ones. It’s the fight to save America! From the Russians and Muslims! The whole thing plays like a rightwing wet dream.

I love when Ultimate Cap taunts the Muslim supervillain like a Bond bad guy.

The issue’s split into three fight scenes–Ultimate Cap and Muslim guy, Hulk and Abomination, Quicksilver and bad fast person. The most emphasis goes to Ultimate Cap, but the Quicksilver scene is at least witty. Millar tries it with Hulk and flops.

Then there are some Iron Man inserts, but Hitch’s robotics are so confusing, I could never even see what Ultimate Tony’s piloting. Maybe a space station.

The real question is Hank Pym. Is he really a traitor or was he always a secret agent?

It’s the only interesting thing about the comic.