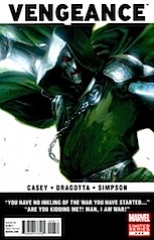 Casey ends Vengeance congratulating himself for a job well done. It must be nice to be so unaware of the quality of one’s work. This final issue is a disaster–except Dragotta’s art–and the editor doesn’t help things. The issue opens with a letter from the editor explaining the history of the series….

Marvel had a series of covers, but no comic to go with them. Casey came up with a story to tie them all together. It’s actually shocking he managed five decent issues, given that origin.

Here, Vengeance completely falls apart. The Teen Brigade are supposed to be sixteen, which is laughable the way Carey writes them, and he has the SHIELD agent narrate the whole issue.

It’s one bad choice after another.

Dragotta’s got some great battle scenes, but even he can’t overcome the script’s frequent stupidities.

The issue’s bad, but can’t quite ruin the series.