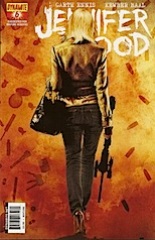 Ennis’s time on Jennifer Blood does not end well. Not well at all. He doesn’t just not bring back the diary, like he promised, but he also totally changes the narrative approach.

This issue, for the most part, is a monologue from Jennifer Blood. There’s a little with the neighbor, which ends poorly as well. Ennis’s humor for the issue feels like watered down Preacher, plus watered down Punisher MAX violence.

What’s so inexplicable about Jennifer Blood is Ennis’s lack of interest in the series. He seems to have come up with the idea–the suburban housewife Frank Castle–and then immediately gave up on the series.

Baal isn’t any good on the talking heads stuff, but he could be a lot worse. I never thought I’d be saying it… but the issue’s problem isn’t the weak art, it’s Ennis.

It’s a waste of time for Ennis and the reader.