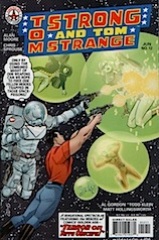 Moore does a really nice job finishing up his Tom Strange two-parter, especially given how much material he brings into it.

The issue opens with the two Toms unfreezing all of Terra Obscura’s heroes and introducing them. They aren’t quite analogs to popular superheroes, but it’s hard not to see Batman in the Terror, who has a kid sidekick and everyone suspects is secretly nutty. Pretty much every other modern superhero analog owes it to Moore and Tom Strong.

Then there’s a brief introduction to the alternate Earth, which is fantastic. Sprouse doesn’t go crazy with it, just straightforwardly illustrating the amazing setting (an inverted city).

And the action-packed finale is exciting and touching. It’s no small feat, since Moore’s got the reader caring about characters he or she only met five pages earlier.