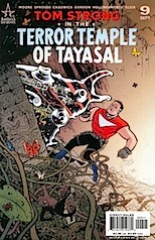 The issue’s a family affair, with Tom, Dhalua and Tesla each getting their own story. Paul Chadwick handles the art on Tom’s story. His style mimics Sprouse quite a bit. If I hadn’t seen Chadwick’s name, I’d have no idea.

It’s a nice little story, with Moore mixing jungle adventure with positivist sci-fi. It ends a little fast though.

Dhalua has a good flashback story. Mostly Moore is just filling in her backstory, rounding the character. He does an exceptional job with the character, making her more distinct than Tom. Sprouse and Gordon do well with the constrained setting.

They also do the art on Telsa’s story, which Moore models on DC backups, like a Supergirl one. It’s a lot of fun, with more great art from Sprouse and Gordon. It’s got the most humor. Moore succeeds at making his observation on comics traditions while writing a great character.