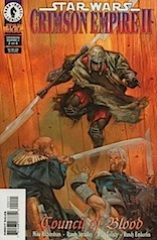 Once again, there’s the item you can tell Gulacy just went gloriously overboard with. This time, it’s one of the squid faced aliens–but as a Hutt dancing girl. Emberlin inks are especially good; there are some great alien worlds panels in the first few pages.

Richardson and Stradley are slowly developing the overall story. The dialogue is good, the characters are all good. The issue passes without many hiccups, but it also passes without a real character. Crimson Empire II is apparently a licensed Star Wars comic first and a narrative second.

In fact, this issue is still setup for whatever’s going to come, big and small. The previous issue introduced two general story lines. This one expands it out to three or more. The writers are enthusiastic about whatever they have planned and it helps.

It’s still too soon to decide on the series, but the issue’s good.