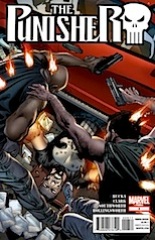 I’ve got to say… Rucka’s never going to be able to recover from the Punisher having a snow outfit. It’s like Batman & Robin or something. Next he’ll have ice skates in his boots.

This issue’s pretty lame. Once again, Frank is silent. But more, Lady Punisher is mostly silent too. The big predictable set piece happens and Rucka (along with new artists Matthews Southworth and Clark) channel their nineties John Woo. Is John Woo still cool enough to channel? I don’t think so.

There’s nothing particularly terrible about the comic. Oh, sure, the white snowsuit Punisher costume (perfect for an action figure variant at the Disney Store) is dumb and the two Matthews have lots of art problems, but it’s not offensive.

It’s just juvenile. Rucka finally was making some progress on the book and he’s completely flushed it. He still hasn’t made Frank Castle a character.