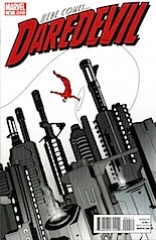 Is Martin regular on Daredevil now? If so, it makes sense this issue feels like a soft relaunch, like Waid’s introducing the new artist. If not… well, it makes no sense.

But it’s a successful issue. Waid opens with some amusing action–Daredevil in a lion habitat at the Bronx Zoo–and then moves into this issue’s story. He just does it very slowly, very deliberately. There’s a lot of Daredevil in action, fighting the odd crime, there’s a lot with Matt bantering about not being Daredevil or bickering with Foggy.

There’s none of the flirting, which is okay, since Martin doesn’t draw Matt like a surfer dude.

It’s the kind of issue one would get excited about–it’s even more exciting that the series’s actual first issue–but I’m rather hesitant. Daredevil‘s been fine, but uneven.

The issue’s either another deviant or it’s a sign Waid’s firmly footed.