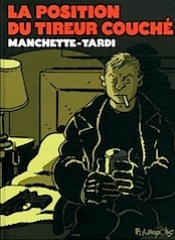 Well, wait, I guess Like a Sniper Lining Up His Shot is more of a measured downer. Tardi, adapting a novel, is decidedly distant from his characters. The finish might be tragic, but if the reader remembers he or she isn’t supposed to have cared particularly much for the characters in the first place… the tragedy is measured.

There’s also a big style shift in Sniper, which gets overshadowed by the far more active second half. In the first half, Tardi seems to be including either large sections of narration from the novel or using long narration in the same style. That approach lets Tardi jump around in time–showing the protagonist’s past–but it leads to a lot of tense confusion. And Tardi also uses it to transition scenes, which fails.

The second half of the book is relatively straightforward, with a lot of unexpected turns. Sniper is about an assassin who wants to retire but, every time he thinks he gets out, they keep pulling him back in. In other words, it’s hard to be inventive in such a familiar genre. But Tardi (and the source novel by Jean-Patrick Manchette, manage to come up with some nice twists.

Unfortunately, the dispassionate first half and the melodramatic ending bring Sniper down. While Tardi has some great art, he doesn’t relish in anything. The story takes place in the seventies, but there’s no enthusiasm for the period.

It’s masterful comic storytelling… but not a good story.