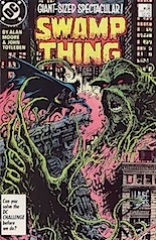 Sure, Moore’s got an over-sized issue, but he still fits in an amazing amount of content. In this issue, in addition to the Swamp Thing stuff, there’s pretty much an issue of Batman. Moore continues to show how well he writes that character.

But there’s also the pacing of it–Gotham is changing and Moore tells that part of the story disconnected from Swamp Thing. Swampy’s worried about Abby, but he’s also a little enthused with his new power.

The Totleben art, which still has the horror tinges, is wonderful. It’s green and full of life; he also comes up with a bunch of iconic images this issue, including one of Batman.

Other great scenes include Lex Luthor meeting with the corrupt government guys (there’s an oxymoron) and of Chester coming to Gotham. Moore also quietly brings back another character.