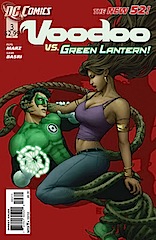 I assume Marz uses Kyle Rayner because he created the creator, but literally any Green Lantern would do. The way Marz writes the character, it could be any of them either. There’s no personality besides Rayner having sympathy for Voodoo as he fights her alien sidekicks.

Of course, Voodoo is out to destroy the earth… or is she? It’s doubtful DC’s going to do a villain comic. But they might.

I think the aliens from Grifter show up at the end too, but I’m not sure and I’m not interested enough to investigate.

It’s a mediocre comic and nowhere near as strong as the first one, but it’s not bad. It doesn’t even suggest bad things for the series overall. Marz just needs to get Voodoo back on her cross-country David Banner jaunt and it’ll be fine.

Nice art from Basri, though his Rayner looks like a complete tool.