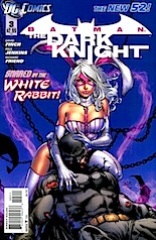 Batman’s a jerk. He badmouths Poison Ivy, saying she’s a villain, says he can’t trust the Birds of Prey (do they really refer to themselves by that name? How dumb) and then doesn’t apologize when he finds out he’s wrong.

But it’s not just Batman making the mistake. Jenkins and Finch mention this Gotham PD lieutenant doesn’t have a detective rank. So he’s a plainclothes lieutenant? Not sure they understand basic rankings. Or maybe they’re trying to have Batman tell a joke. They fail.

There are lots of attempts to bring the series into continuity. They seem pretty silly once Batman forgets the Joker doesn’t have a face… not to mention them having a previous relationship. I thought Detective established they weren’t bantering nemeses yet.

Still, it could be worse. Not a lot worse, but definitely worse.