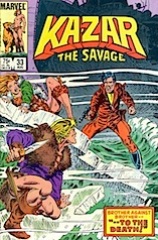 Carlin’s destruction of the series seems to be complete now. In this issue, he reduces Shanna to a helpless damsel. He’s got Ka-Zar running around thinking about how he’s going to save after she falls victim to an absurdly drawn out incident.

But this moronic event occurs halfway through the issue, until then it’s just Shanna being a stupid female, ignoring her obviously smarter man.

For the first couple pages, it almost looked like Neary’s art was improving. It doesn’t, however. I’m just trying to think of good things about the comic. This issue ends with a note from the editor announcing its cancellation. Strangely, the editor, Danny Fingeroth, takes no responsibility… and he really should. The series has gone, albeit slowly, to pot since he took it over.

There’s one nearly good moment, with Ka-Zar and Shanna watching “television.” The punchline’s cute. It saves the comic from being entirely worthless.