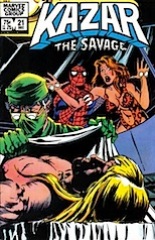 Mel Candido is great inker for Frenz. For the most part, the issue looks great. Not great great, but great for a Marvel house style book, which Ka-Zar has apparently become. Right down to the Romita-style Peter Parker.

While the issue opens resolving the big Ka-Zar versus Kraven fight, it then becomes a conversation issue. Not quite talking heads, because the pacing isn’t slow enough. For example, Spider-Man and Kraven argue over whether they should fight, seeing as how they both worked together to save Ka-Zar.

The issue is then Shanna talking to Peter Parker about her life.

But somehow, it’s all very traditional. Jones doesn’t include any indulgences, but more… it seems like he isn’t interested. It’s a fine issue, but an unenthusiastic one.

However, the flashback backup is amazing. Mayerick’s art on this installment is singular and Jones writes a surprising hard cliffhanger.