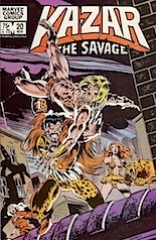 Frenz is far more in his element here, with Ka-Zar having a New York adventure with Kraven the Hunter. They’re swinging around, crashing comic cons and just generally having antics. Jones’s strength is in the details, whether it’s he and Frenz cameoing at the con, the moronic cops Shanna asks for help or Ka-Zar figuring out what’s going on (he’s temporarily mute on top of the bullet lodged in his skull).

It’s the most fun Jones has had writing Ka-Zar as a narrator–he’s too busy trying to figure out his situation to be callous.

There is one major goof–Shanna’s in her jungle outfit, even though she wasn’t last issue. Apparently Frenz wanted her scantily clad.

Kraven’s a weak villain for Ka-Zar, who doesn’t do well in the “grounded” reality of the Marvel Universe.

The issue’s fun, but not particularly special. Though it does put Frenz to good use.