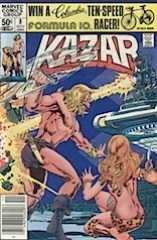 Between Jones exploring the history of Atlantis themed entertainment and Anderson apparently deciding to be lazy, Ka-Zar doesn’t feel much like itself.

The problem isn’t really Anderson, though his lack of detail is stunning. He takes the time on his panel composition, but the actual faces and figures are broad. The issue is almost entirely expositional–Jones goes through a little action, a lot of bickering and it’s all for a little joke. Maybe Anderson just couldn’t get interested.

Shanna and Ka-Zar spend most of the issue in a futuristic Atlantean outpost, on the run from a deadly robot. Not much jungle adventure going on. Jones loses his hold on the characters and the issue. He tries and fails.

As far as the creativeness behind the Atlantean outpost plot line… it’s good. It’s very creative. It’s just not the right presentation of the material for a comic book.