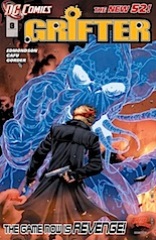 Grifter is, again, okay. It’s all of a sudden got Cthulhu references, which is sort of odd, and Edmondson is really confusing about Cash Cole and his brother.

Last issue it seemed like his brother, this issue it seems like they’re both Special Forces and therefore “brothers” but it turns out they’re definitely real brothers.

It’s an all-action issue though, whether it’s Cole or his girlfriend, who’s fighting some new bad guys in Gotham City. Edmondson tries real hard to integrate the comic into the DC Universe geography–Gotham City here, Green Arrow’s city at the end. Grifter, a paranoid sci-fi thriller, doesn’t really belong in continuity, yet it has to be in continuity. It’ll probably lead to some terrible crossovers.

The Cafu art is still all right.

Edmondson recovers from his lame cliffhanger last issue by using it for melodramatic purposes. But he does still recover.