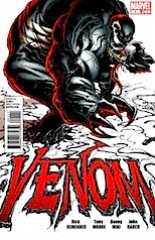 What a depressing comic. It’s like Rick Remender looked at some old Spider-Man comics and tried to figure out how he could make any even more depressed arachnid superhero.

Flash Thompson (the new Venom) comes into the comic a jingoist and leaves it a broken wretch. I initially had problems with Remender’s characterization because it seemed cheap–Marvel trying to sell comics to the U.S. Army. The end decidedly makes the book something quite different.

There’s a slight disconnect because Thompson’s “Agent Venom,” the worst detail in the comic is that name, comes in acting like a super-U.N. peacekeeper, but it’s soon revealed he’s just a black ops guy for the U.S. government. Neither fit into Flash’s self-image at the start of the comic.

But Flash was never smart, something Remender doesn’t shy away from.