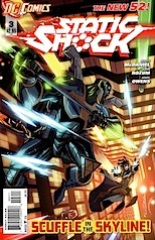 Every issue of Static Shock I wonder if it’s possible for McDaniel to get worse as an artist and as a writer. Once again, he doesn’t disappoint.

Besides the action scenes being incomprehensible, they’re badly paced. The big action scene this issue is reduced to one crappy page. It’s sort of amusing in its incompetence.

And then there’s the narration. Static is just as bad Spider-Man cocky in his day-to-day narration as he is in his dialogue with bad guys. Except we’ve never seen the women drool all over him; he appears to be a complete zero with the ladies. Overcompensating? Closeted denial?

The dueling clones are still interesting. They’re so compelling, not even McDaniel can ruin it.