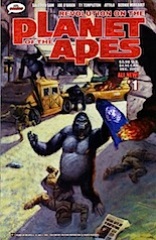 Ty Templeton can draw,right? What I mean is… why did he hire Salgood Sam, who’s not a very good artist, to draw Revolution on the Planet of the Apes if he could do it himself? Sam’s a step down from the Adventure Comics Apes franchise, even if there is color this time around.

I assume it’s because Templeton thought–as the publisher too–people desperate for Apes comics would put up with anything. And I guess they might… if they didn’t like even medicore comic books.

Templeton (who plotted) and scripter Joe O’Brien do a direct sequel to the fourth Apes movie, Conquest, and a little bit of a prelude to the final film, Battle. Unfortunately, they don’t have anything interesting to say about either film. It’s shaping up to be boring and political.

There’s definite enthusasism, but it doesn’t produce anything good, showing enthusasism isn’t everything. Or anything.