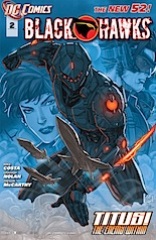 Here’s the funny thing about Blackhawks–if it were an Ultimates rip-off, it might make sense. As a G.I. Joe one though, it’s silly. The new DC Universe has way too many secret organizations.

Though the funniest thing has to be Costa’s understanding of technology. The Blackhawks don’t have the power to remove things from the Internet, but they do have laptops with 300,0000 terabyte hard drives. So it’s all futuristic, but not in any useful way.

It’s even sadder because it means the Blackhawks can’t take down my post about their crappy comic book.

The problem, besides there being no point to the comic, is Costa. It’s not just his stupid details, it’s his inability to give his characters any personality. He ought to just call them “Patch,” “Specs” and “Silverhead,” because they’d be more memorable.

The art’s not bad, though Nolan doesn’t have anything good to draw.