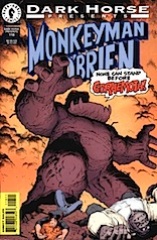 I thought the other Monkeyman & O’Brien stories were bad. Here, Adams seems to forget how to draw with perspective and scale. It makes the story a hideous curiosity, but not much else. The script’s incomplete at best.

Then Trypto finishes up and it’s probably be Leialoha’s best installment as an artist… and Mumy and Ferrer’s worst script. Trypto apparently isn’t from space. No, he’s an inter-dimensional ghost dog out to do something. Get back with his original family. How he got the new family in this story is never explained. There’s also a talking raccoon. It’s a very strange finish for the series, which started so strong.

As for Dorkin’s Hectic Planet? I liked the art a lot. The story’s about Dorkin making fun of this character, both in plot with supporting cast mocking him. It’s exceptionally mean-spirited and not aware of it. Still, it was compelling enough.