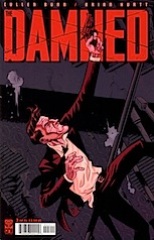 I think this issue is Bunn’s first all action issue. I guess it’s not all action, but the second half is a long action sequence (a gunfight) punctuated by a mob shootout. The opening is some more weirdness going on with the demons and Eddie talking to the Worm.

Eddie continues his investigation (what’s so great about Damned is how it’s a pre-noir noir) and gets into that gunfight. It’s a beautiful sequence from Hurtt. Eddie’s falling flights of stairs, he’s shooting from cover. Just fantastic design and execution. Still, it’s just a big long action sequence.

There’s some hinting at what’s to come–Bunn introduces some more backstory here (though I don’t think we ever hear about demons first appearing on the mortal plain).

It’s good, but it ends wanting.