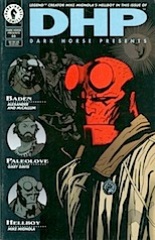 This issue features something I never wanted to see… a Paleolove pin-up from Davis. You can tear it out and put bad art up on your wall.

His artwork is really weak for the first half, maybe his worst ever. It gets a little better for the second half of the boring installment. The writing is absolutely awful (Davis goes on and on about the “manly arts” here—basically hunting). He brings in another old character, but at least gives this one something to do.

The Hellboy story is good. It’s amazing how Mignola can make them spooky but generally mainstream. Hellboy’s barely in this installment, most of it has to do with the mystery, but his sidekick gets more page time it seems.

Alexander and McCallum’s Baden is some stupid sci-fi story about a riot cyborg or something. McCallum’s art isn’t bad but Alexander’s script is atrocious.