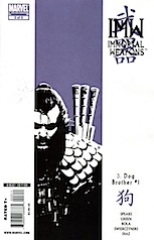 Who’s this Rick Spears guy and why have I never heard of him before? His origin of Dog Brother #1 is fantastic.

He opens it in late nineteenth century Hong Kong, where Dog Brother is something of a myth. Spears’s protagonists are these two orphans, trying to navigate the gangs, the British and the poverty. It’s sort of incredible how subtle Spears’s writing manages to be, given everything going on in the story.

Eventually, whether or not Dog Brother #1 has anything to do with the story doesn’t matter anymore. Spears gives his protagonists this tragic arc. He never pushes it or makes it melodramatic. He just lets all the awfulness play out.

Some fine art from Green… just a great piece of work.

The Iron Fist backup is messy. It’s too short, confusingly follows the previous installment and Diaz’s artwork is terrible. Swierczynski tries, but he can’t do much.