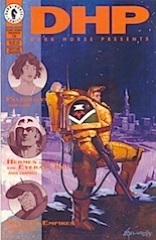 Ever have a friend who could draw really well? Moeller’s art on Shadow Empires is like a friend who can draw well. He takes time with it, he works at it… but it’s still totally not ready for the big leagues. It’s somehow even rougher than some of the worse art Presents has published. The writing’s pretty lame too (it’s like Dune again).

Campbell and company turn in another fine episode of Hermes here. While the Eyeball Kid is in hiding, Campbell concentrates on the supporting cast. It’s awesome how little the fight has to do with what Campbell does with the story installments. This issue a trio decides to become supervillains in a rather hilarious conversation (I only hope Campbell shows them in the costumes they discuss).

Davis’s writing hits a new low on Paleolove. Every time I think I’m through reading him, Presents publishes yet another dumb story.