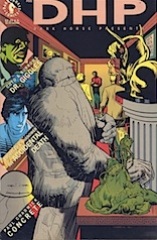 Obviously, the major attraction is the second chapter of An Accidental Death. The pace changes throughout; it opens with the body being hidden, then Brubaker moves to summary, then to scene again. The final scene–the discovery–comes after the two boys (the protagonist and the murderer) start to discover where they really live. Reality, in more ways than one, rushes in on them. But Brubaker’s writing is nuanced, never obvious. It’s just lovely.

Then Dr. Giggles, hopefully, finishes up. I don’t think I’ve mentioned how inept Coto is at plotting this narrative. The plot developments get stupider and stupider. At least it’s over.

The Concrete story is a little overwritten… lots of narration, but it’s amusing and Chadwick and Hotchkiss do a great job with the art.

The issue ends with two one page Alec comics from Campbell. Both are quiet, wonderful and somewhat profound. It’s such good work.