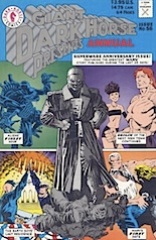 This oversized issue opens and closes with an Aliens two-parter. Loose art from Guinan and Akins doesn’t help Arcudi’s script. It’s absolutely incomprehensible if you don’t read the Aliens series.

Byrne finally produces a Next Men I’m not interested in. It’s two government guys revealing all. The art’s really, really mediocre. It’s like even Byrne doesn’t have any interest in this part of the story, which really makes one wonder why he’s bothering tell it.

Duffy and Geary both have nice stories. Duffy (with Chacon art) has an amusing fantasy story, Fancies about a tavern fight, while Geary does the history of Eldgytha. She was British royalty who had a lot of husbands. It’s fantastically concise and engaging work from Geary.

Sin City is crap, but not as mean-spirited as Earth Boys.

Arcudi and Eaglesham’s The Creep is good. It’s maybe the best thing I’ve read from Arcudi.