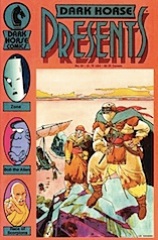 It’s a banner installment of Race of Scorpions. Two things I never thought would occur do this issue… first, Duranona uses shadows to give the reader some sense of depth. Well, only for half the story, but still. Second, he comes up with an interesting detail! In this miserable future, cookbooks are bibles. I’m stunned by these developments.

The Zone story is on the low side of okay. Kraiger spends too much time on the boring Zone character (before he douses some guy in toxic waste or something, which is funny). But the art’s good and the plotting is decent. Kraiger has some sense of what he’s doing here.

Rice’s Bob the Alien story is awesome, as usual. Here Bob encounters deception, but still manages to come out ahead. Lots of laughs, great progression of narrative.

The Duckman story is only a page long and I don’t really understand it.