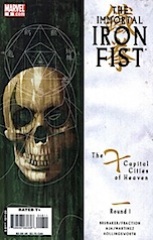 The big Enter the Dragon fight competition starts off here… only there’s not a matched fight. Instead, we get to see Danny in K’un-L’un. It’s interesting, sort of, to see Danny trying to acclimate. But he’s mostly trying to figure out what’s happened to Jeryn (his mix of Alfred and Lucius Fox).

Turns out Jeryn’s building a thing for Steel Serpent–I kind of remember this arc and they’re definitely up to no good, like bringing a capital city of heaven down to earth.

The flashback art (to Danny’s father) is from Martinez and he does a good job. He does such a good job, I just thought Aja was trying out a new style at the beginning.

Brubaker and Fraction maintain the action and humor, bringing in a bunch of little elements (intrigue over some girl, conflict with Steel Serpent) to good effect.

It’s too fast, but good.