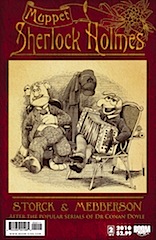 The second issue is as nice as the first.

Storck doesn’t use “Muppet Show” standards (he did in the first issue for a great narrative device), but he does insert Kermit’s Inspector Lestrade–sorry, Inspector LeStrade–into the story. I don’t think Lestrade was in “A Scandal in Bohemia,” but he’s around here, a third wheel affixed to Holmes and Watson.

The plot pretty much follows the original with some Muppet flourishes. Storck and Mebberson come up with these great one or two panel gags–Gonzo, Fozzie and Kermit disguised as a post box, call box and bush having tea. But Storck also has more elaborate flourishes here–Miss Piggy plays Irene Adler and she has a dinner party the boys crash.

The dinner party antics are where Storck and Mebberson’s pacing skills really show. They’re able to fit a lot of events into a few pages.